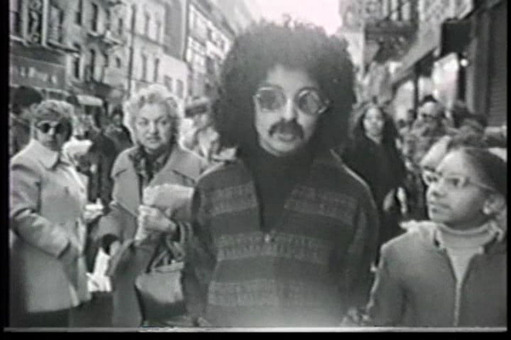 The Mythic Being, series of performances documented with black and white photography, 1973-5

Adrian Piper disguised her identity, changing her race, sex, and social class in order to experiment in public situations and gauge people’s reactions.  She investigated how outwardly visible identity markers (like skin color) impacted others’ perceptions of her character.  By manipulating her (apparent) identity to produce reactions, she demonstrated the power and influence of stereotypes (Piper, 1996).

Piper dressed up as her black male alter ego, putting on a large Afro wig, sunglasses, and a mustache and cruising the streets of New York performing typically masculine behavior such as ogling women (Piper, 1996).
The performances are about people’s perceptions of a certain identity, specifically a black man exhibiting typically male behavior.   They also allow Piper to free herself of the ambiguous space she occupies as a light-skinned, fine-featured, highly educated black woman.  It makes the viewer contemplate his reactions to the “Mythic Being,” and perhaps reflect upon his own stereotypes and biases (Piper, 1996).

Piper’s performances recast and recontextualize a university philosophy student as a working-class black man.  She utilizes the bold, unmistakable image of an Afro hairstyle to fill a specific identity (Piper, 1996).
Powered by